So yes, we are back in Catalunya, Spain, for a bit. We had such a good time here last year, we thought, well, why not? And wow, what an amazing time it is to be here. The climbing is great and there has been so much going on, itâ€™s a really fun place to be. The weather has been superb, primo, but last night a storm brought the first rain in weeks and so â€“ thankfully — at last we are having a much-needed rest. Itâ€™s a chance for Monique to grow some skin back, and for me to finally write about some of the things that have been going onâ€¦

This area is surely the worldâ€™s epicentre of hard sport climbing. More than a few of the worldâ€™s best sport climbers have been here recently, escaping the colder parts of Europe and North America to enjoy the early spring time conditions at awesome crags â€“ such as Santa Linya, Siurana, Margalef and Oliana. Lots of ultra-hard sends by men and women at these crags have constantly been making the climbing news of late. 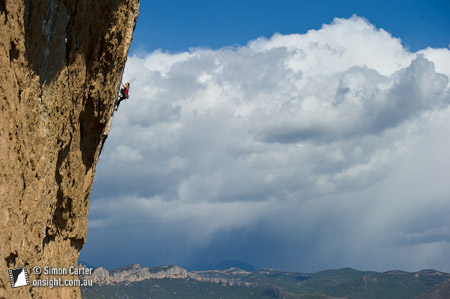 In fact, if you look at the news coming out of these parts, itâ€™s the women who have dominated it. And rightly so. There is undoubtedly something going on here. Maybe itâ€™s because â€œresistanceâ€ and â€œenduranceâ€ count for so much here. Or because there are some routes which donâ€™t have stopper height-dependant cruxes. Or maybe itâ€™s because the routes are so damn good, long, and inspiring. But whatever it is, the women have stepped it up.

Weâ€™ve mostly been climbing at Oliana where, before we arrived, Daila Ojeda succeeded on Mind Control, her first 8c+ (Aus grade 34). This route is the awesome 50-metre resistance crag classic, which I first mentioned here. Soon after I arrived here I did a photo shoot on this route with Daila; here is just one photo from that –Â  some are going to appear in print soon so Iâ€™ll hold off from putting them all on the internet, for now. 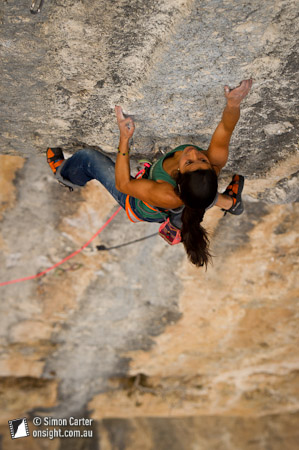 Daila has a really smooth climbing style, it was great to see. Brett and Josh Lovell from Big Up Productions are here and have captured some fantastic footage of Daila using an elaborate camera trolley system courtesy of Matt Madaloni and his Sea to Sky Cable Cam, definitely look out for that footage (probably at the Reel Rock Tour). 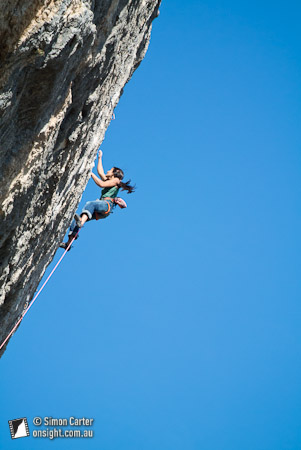 Dalia achievements have undoubtedly been inspiring to other women. The video of her on Fish Eye drew Moniqueâ€™s attention to that route, and sheâ€™s not the only one. Itâ€™s no surprise to me that once one of these classic hard routes receives a female ascent, other women are more likely to have a crack at it. And thatâ€™s what has happened on Mind Control. Nina Caprez also climbed Mind Control a few days after Daila and now the floodgates have indeed opened. Since Iâ€™ve been here Iâ€™ve seen Caroline Ciavaldini and, more recently, Sascha Digiulian also send it — with Sascha smashing it in just two days! Far out brussel sprout! (Has Sascha got a nick-name yet? What about Sascha the Dispatcher?). Eva Lopez was also trying it and will be returning soon. And the uber-strong Russian woman Evgeniya Malamid was making good progress on it before her time here ran out. Iâ€™ve seen a few men send it in the meantime too.

So we have one of the worldâ€™s premier crags for ultra-hard sport climbing, in peak season, with some of the best sport climbers in the world coming here — in peak form. The sending spree might surprise some armchair critics, but considering those factors the spree certainly doesnâ€™t surprise me — and it sure has been great to see!

On another note though, I have also noticed something a bit odd here, which could easily give the impression that some of these routes are easier than they are. And that is the way some of these ascents have ended up reported in the climbing media. I first noticed something strange when a climber sent a route second time that they were on the route that day, and their ascent was reported in the media as â€œsecond goâ€, yet the detail about them having been on the route the previous year didnâ€™t make it through to the news report. Another time, a send was reported as â€œ3rd repoint attemptâ€ with no mention of the days spent working the route â€“ of which Iâ€™d seen several. Now, I donâ€™t think there is anything deliberately dodgy going on. I asked around and it seems that itâ€™s just a way of reporting accents used by some climbers (probably very much a minority) from some European countries. Fair enough, people will report things in the way they are familiar with, and perhaps some of the detail hasnâ€™t been picked up by the media.

There are a few problems with this though. Firstly, no matter how well intended, if climbers are just highlighting the â€œshotsâ€, â€œgoâ€™sâ€ or â€œredpoint attemptsâ€, without the time also spent working the route, and thatâ€™s all that gets picked up by the media, then it hardly gives a complete picture. Secondly, itâ€™s not consistent with the way many climbers do report their ascents. And thirdly, and perhaps this one is just me, you know — an old fart, grasping to keep up with the latest lingo jingo, but the different terminology is a little confusing at times. Like, just when is a â€œtryâ€ or a â€œgoâ€ a â€œshotâ€ â€“ or not? I think Iâ€™ve got that a â€œdogâ€ is a â€œtryâ€ and not a â€œshotâ€ nor a â€œgoâ€, let alone an â€œattemptâ€. Er what!? Yeah, um maybe Iâ€™m a bit confused. Where did I put the Panadol? Anyway, if climbers want to report this stuff then whatever happened to good old-fashioned reporting of â€œdaysâ€, i.e., any day you got on the route â€“ no matter how long or for whatever reason â€“ got counted as a day? Itâ€™s not a big problem, and should be easy for the climbing media to get on top of â€“ if they just start querying these sorts of reports.

But I digress. I know the real reason you are reading this blog is to find out how Iâ€™ve been going on my latest project, and on that front I am stoked to report that after three weeks of top-roping I managed to send my 7b+ proj on my very first shot! It actually felt easy. Yeah, 7b+, and definitely soft…

Thanks for reading my blog. More soon!