A few months ago I mentioned that we were up in Queensland shooting and climbing. A lot of the shooting that I was doing on that trip is for a new coffee-table book on Australian climbing, among other things, but the other big project I was working on was a guidebook to several crags in South East Queensland. There were so many times when we were travelling around up there that I wished there was already a guidebook like this, so I’m sure this new guidebook will be a handy thing for many climbers. The guidebook is a collaborative effort with several local climbers but more on the guidebook later. The result for me was that as soon as we returned from Queensland I basically locked myself in the office and spent the last two months in full-on guidebook production mode. For a while it was a nice change to spend some time at home and have a bit of break from travel for while. Producing guidebooks is really satisfying but it’s not my main business and so when I work on one I don’t have the luxury to spend years pottering away at it; I need to fit guidebook production in between trips. The upshot has been that I’ve had my head down and been focused, neglected blogging and even emails, but because I was working with a great team we got the job done and the book should be in the shops before Christmas. Psyched!

So anyway, here is then a little photo essay on our trip up to Queensland. It really is an awesome winter climbing destination.

We arrived in time to compete in the Queensland Bouldering Competition, it was a really fun event run by Urban Climb. Somehow I managed to snake my way into second place in the mens Masters category. Don’t know how I managed that but it’s good to know this carcass still has a little crank left in it even if you wouldn’t know it judging by my performance on rock of late… But of course we were up there for real rock. We split our time between Frog Buttress and the crags up on the Sunshine Coast north of Brisbane. Frog Buttress is famous for its amazing crack lines of course; there were photos that I wanted to do there and Monique found a project but more on that later. The great surprise for me this trip was just how much great climbing there is up on the Sunshine Coast so I’ll start there… Just an hour north of Brisbane you have the amazing Glass House Mountains: 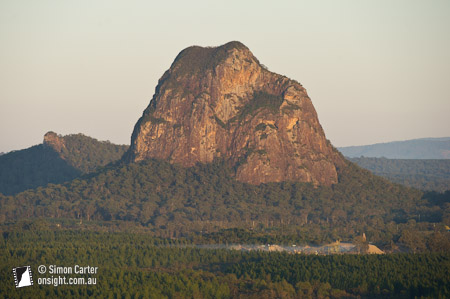 This is Mount Tibrogargan , the largest of the Glass House Mountains. There is a huge variety of climbing on Tibrogargan. Slider is a high-quality sport sector down in the shade on the left, the patch of orange just to the right of that is Celestial Wall, and the orange up high is the wickedly overhung Summit Caves. 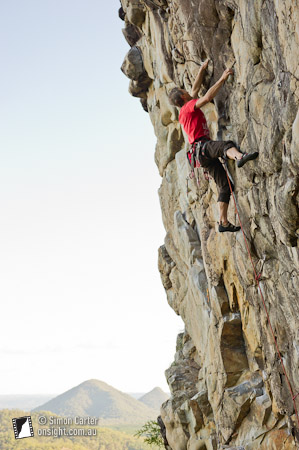 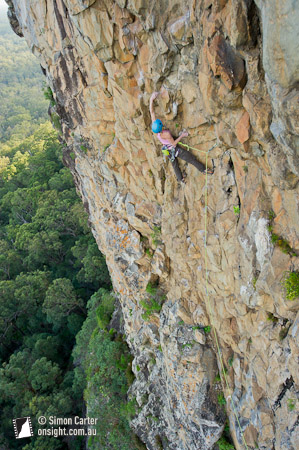 John J O’Brien got this shot of me abseiling into position for a shoot on Clemency Wall, Mount Tibrogargan. 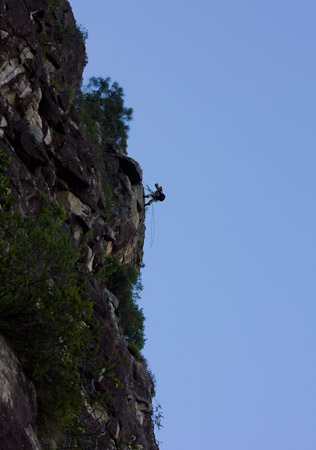 And the result from the shoot… 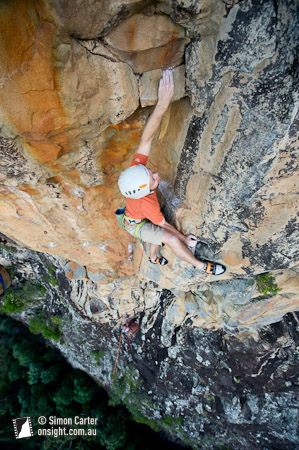 And some antics up in the Summit Caves… 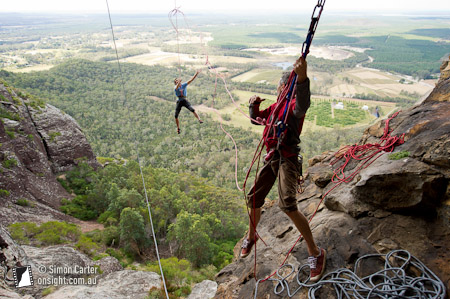 John O’Brien nails the throw first shot to save Lee Cujes from being stranded off his A Gaze Blank and Pitiless as the Sun (30), Summit Caves, Mount Tibrogargan.

And Mount Coolum is a well-known sport climbing crag super close to the beautiful Sunshine Coast beaches. The climbing is funky and requires a lot of knee-bars. People seem to either love it or hate it, Monique loved it. 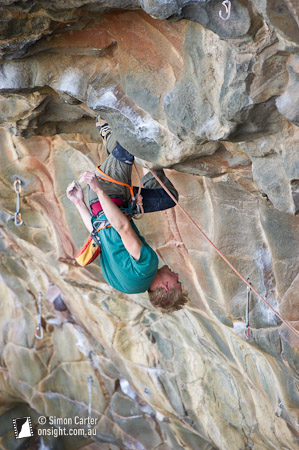 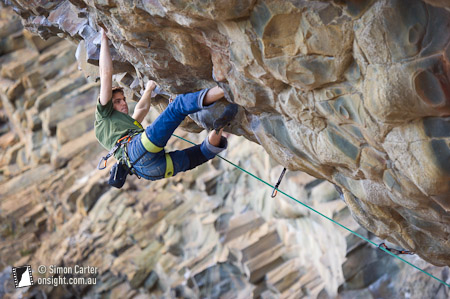 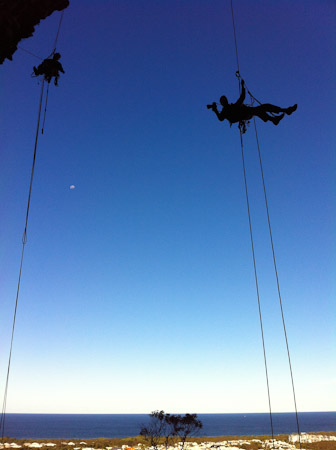 And from the belay John O’Brien got another shot of me at work. That’s me on the right and Phil Box on the left.

Good times at Coolum. Coco was so inspired she strummed out a few chords and hummed out somes tunes for her first album.

And close to Noosa there is the generally, but not entirely, slabby Mount Tinbeerwah with a swag of good routes. 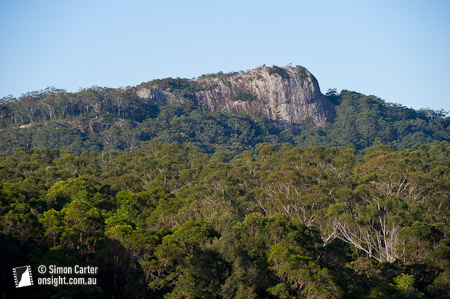 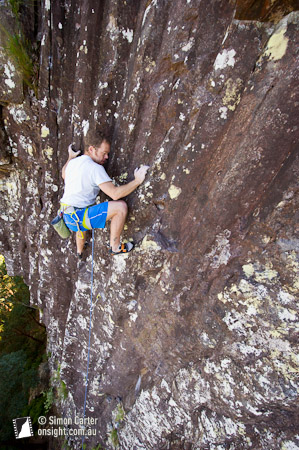 Nearby we jigged and poked our way two pitches up Mount Cooroora to get some shots of a stunning arÃªte which John O’Brien (JJ) had established. 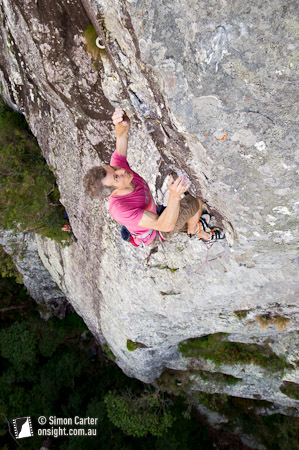 And if you head a bit further north there’s a popular bunch of sandstone crags at Brooyar. 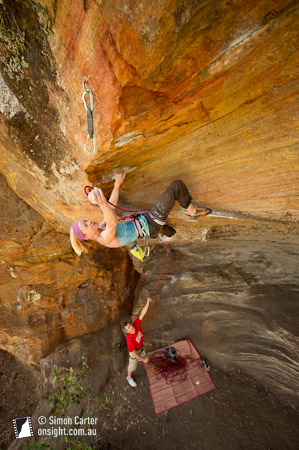 Little Wednesday (25) is not to be missed, especially if like Monique you’re already done its Blue Mountains namesake Big Wednesday. 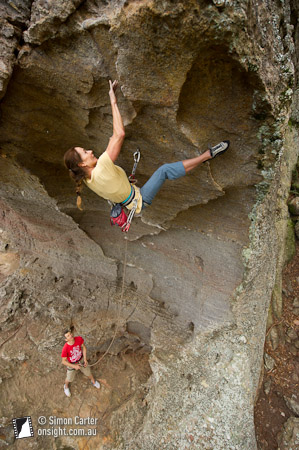 So much great climbing! But you know, one of the things I really loved about the Sunshine Coast was that there was more than just the climbing. It’s a beautiful place to visit and hang out. I’m already looking forward to escaping next winter and heading north again, putting the new guidebook to use, and gosh, hopefully having a holiday! 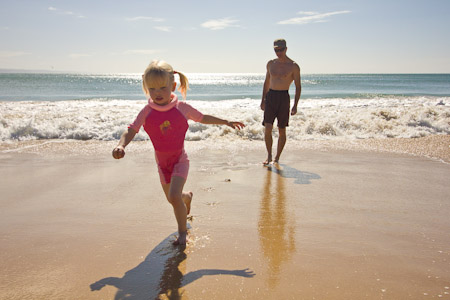 Those beaches! Coco and I at Noosa. Photo John O’Brien (check out his blog).

So until next year, a big shout of thanks to John J O’Brien, Sandra Phoenix, Rob and Donna Saunders, and everyone else who helped make our trip up there so awesome!