Update (2017): This Grampians Climbing: Sport Crags guidebook (2013 Edition) has sold out but the new updated and expanded (2015) edition of this guidebook is available here.

Edit: Since publication of the guidebook author Neil Monteith has compiled this document detailing updates, corrections and several new routes.

This blog might have been a bit quiet of late but behind the scenes things have as busy as ever. Now I’m delighted to announce that our first project for the year is complete and will soon be released. It is an entirely new guidebook to one of Australia’s best climbing areas — the world class Grampians in western Victoria! The book is titled Grampians Climbing: Sport Crags. We decided to note “Sport Crags” in the title because the book covers the main sport climbing areas, however the book actually covers some 53 crags and the trad routes at those areas are also thoroughly documented.

This guidebook was personally a very satisfying project to work on. The Grampians has been one of my favourite places for climbing for the last 25 years and it has long been one of my favourite places anywhere for climbing photography. It was great to be able to use some of that photography (seen and unseen) in the book. This guidebook is long overdue and in the 11 years since the last Grampians guidebook many fantastic new routes have been climbed. 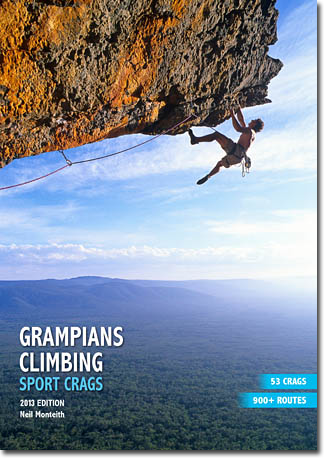 The author of the book is Neil Monteith; he has established scores of new routes in the area and has his finger on the pulse. I really want to take my hat off to Neil here. It was a pleasure and an honour to work with him on this. Neil had been researching and recording Grampians crag and route info for years, he was in a unique position to author this book and backed it up with countless hours of hard work to get this finished. During one research trip to the Grampians in late 2012 Neil visited nearly every one of the crags, checked route descriptions or wrote new ones, detailed the access, and took cliff photos covering many of the crags. There are 53 crags in this book; that’s an incredible amount of work! I’d worked with Neil before on Crux Magazine and other projects but never cease to be impressed by how exceptionally prolific he is and by the quality of his work. Basically Neil made my job on the production side of things as smooth and easy as possible. For some weeks there Neil and I were both smashing out up to 16 hours a day on this. The result was that we have created something I’m really proud of but also we finished production in super fast time. Thanks Neil!

Before I present the book first a word about the bush fires. In case you are not yet aware, in late February several lightning strikes started bush fires in the Victoria Range area of the Grampians. These bush fires joined together into one massive blaze. Despite the efforts of hundreds of workers and volunteers and a huge amount of resources that were thrown at it, there were incredibly unfavourable weather conditions and the unruly blaze burned out of control for over a week. It ended up burning through most of Victoria Range. They say bush fires are natural and to a degree necessary for the bush’s long term rejuvenation, but at times this was an very intense blaze and it is sad to think of the devastation that occurred. The Victoria Range is home to a fair portion of the best Grampians rock climbing and many of these areas are detailed in this new guidebook. Be aware that at the moment the entire Victoria Range is closed to climbing. It is important that climbers are patient and respect the closure. The latest word I’ve seen from Parks is that the area will be closed for weeks or months, check for updates on the Parks website here. Apparently some of the climbing areas have received only moderate damage, but at other areas the damage was more severe. It sounds as though that Parks are keen to reopen some of the areas as soon as possible but be aware there is a lot of work that needs to be done — if only to fix some of the damaged access roads. Outside of the Victoria Range there is of course a huge amount of great climbing in the Grampians; fortunately a lot of this climbing is also detailed in this new guidebook.