Thursday 17th October was already shaping up as a bad bush fire day in the Blue Mountains. The winds were extreme and the large fire near Lithgow, that had started the day before, was fanning fast. Then I heard a fire had broken out near Springwood, later we learnt it destroyed 200 homes. Meanwhile we were working from home in Mount Victoria until a blackout put an end to that, so we were outside doing some fire prep work around the house. Little did we know that power lines had started another fire — less than a kilometre from our house. We smelt smoke, heard sirens nearby, and thought the Lithgow fire might have somehow spotted all that way. Word on the street soon became “GET OUT!!!”. We grabbed a few valuables, saved my slide collection, then I plugged the gutters, turned on the taps and drove away. We thought for sure our house would be gone. In a strange mixed-emotion kind of way I was at least happy to have saved the slides; I’d always assumed I’d never manage that, and years of scanning and digitising them just isn’t the same. 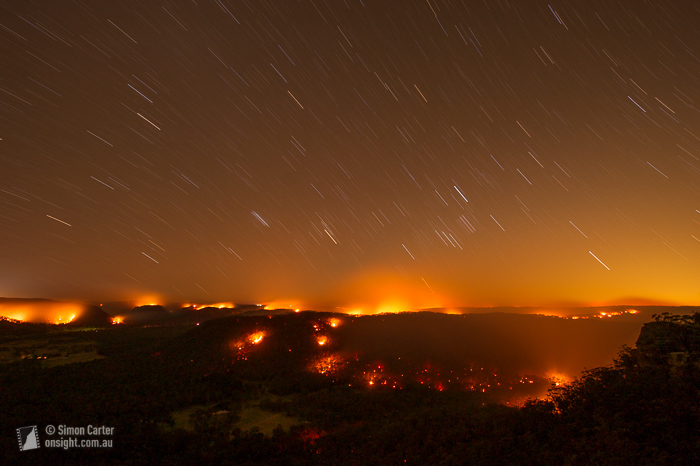 Sleeping monster on a cold still night. Looking from Mt York towards Bell, 15 minute exposure, on the night of October 24th — seven days after the Mount Victoria fire had started (the fires in the distance are from the Lithgow fire; The Mt Victoria and Lithgow fires had joined up). Nikon D3s with 14mm lens.

Some people in a street nearby had little or no warning before the fire was upon their homes; there were some seriously close escapes. Eight houses were destroyed there. But the fantastic efforts of fire fighters and some residents undoubtedly saved many more homes. The fire burnt to our fence but the wind took it away; we were incredibly fortunate. My heart goes out to those who were not so lucky.

The fires kept on burning. Over the following days the Mount Victoria fire spread and positioned itself to the north of Blackheath. With winds up to 100km/h forecast for Wednesday the 23rd, and with fears that the three major fires might join up, an emergency was declared, fire-fighters came in from interstate, an incredible amount of resources were thrown at it — and the predicted catastrophe for Blackheath was somehow avoided. We were living under the flight path of three helicopters doing constant water-bombing, so we escaped and found some relative peace in Sydney for a few days.

Since then there has been rain and the situation is under control. Life has slowly returned to normal for us. Not that I don’t normally, but it has been a reminder to count my blessings and appreciate the good things in life. I know I’m lucky to have such an amazing family. I’m happy to live in such a special place (with some cool climbing too!) and it’s reassuring to find I live in a caring community and neighbourhood. And I’m thankful to our friends who sent us messages of concern, that’s something we really appreciated.

I’ve had some questions about this, so I wanted to quickly report about how the fires have affected the climbing areas here. While the fires seem to have scared some tourists away it has, more lately, actually been a good quiet time to be in the Blue Mountains. Fortunately, many of the best climbing areas weren’t affected by the fire at all and remain open as usual — so there is still no shortage of great climbing to be experienced here. The fire affected areas in the National Park and on Council land are currently closed, so that rules out the great multi-pitch routes in the Grose Valley and a few other crags, for now. It’s hard to guess how long these places will remain closed, it’ll depend on several factors. Past experience hasn’t been fast, perhaps several months in some places. Fortunately some fire affected crags haven’t received much damage so may be able to be opened again soon. Fingers crossed. I’ll try to update this post with more information below as crags reopen. But like I said, in the meantime there is still lots and lots of climbing (and walking) to do around here.

Let’s be grateful for what we have. 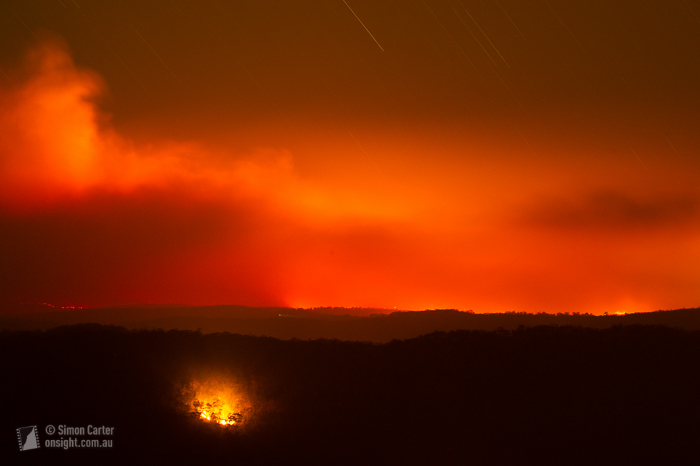