Born in England in 1948, Ewbank first learned to climb in Yorkshire before emigrating to Australia as a teenager with his parents. He initially settled in Wollongong but was soon lured to the sandstone escarpments of the Blue Mountains by members of the Sydney Rockclimbing Club. The crags of the Blue Mountains were to become his spiritual home, as well as the source of his legacy to Australian climbing. 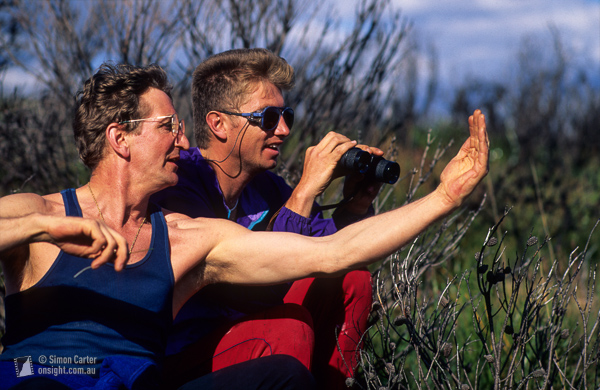 Sandbag in progress? John Ewbank getting Adam Darragh psyched as they reconnoiter a new route that they attempted the next day in the Grose Valley, Blue Mountains, 1997.

Leading climber of the day, Bryden Allen, must have seen potential in the young Ewbank and soon put him to work bolting mighty aid lines using Allen’s newly developed Australian “carrot” bolting system (drill a hole, bash a machine bolt into it, then slip a removable keyhole hanger over the bolt head). Bryden must have done a great job of teaching and motivating Ewbank, because the young English lad went on to establish many of the classic lines of Blue Mountains rockclimbing. 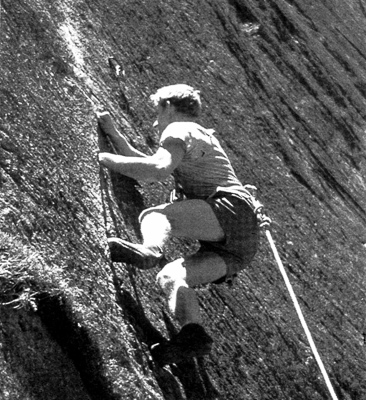 Aid climbing was giving way to free climbing and John Ewbank quickly became one of Australia’s greatest proponents of the new fad. Later, as “natural” protection was developed, he also championed the notion of “clean climbing” – the ethic of eliminating bolts or pins where natural protection could be found. He even railed against the abuse of bolting in his 1967 guide.

Ewbank’s impact on the scene was dramatic. He not only pushed the grades far higher than they had ever been but he re-wrote the grading system itself, scrapping the convoluted British system used in Australia at the time. The open-ended Ewbank Grading System was immediately adopted Australia-wide and is now also used in NZ and South Africa. 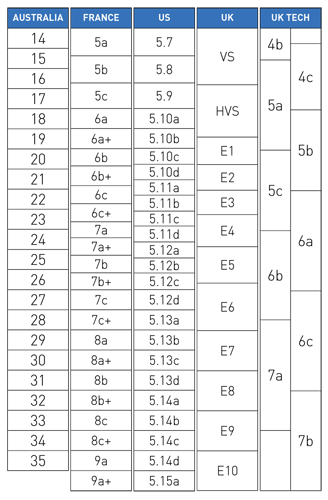 Brilliant in its simplicity, the Ewbank grading system used in Australia is ours and we love it.

Ewbank made his mark throughout the country but especially on the Katoomba cliffs, Dogface, Narrowneck and at the recently discovered Mt Piddington. It was perhaps at Piddington that Ewbank had the most effect. Others climbed at the crag, but Ewbank made Mt Piddington his own. 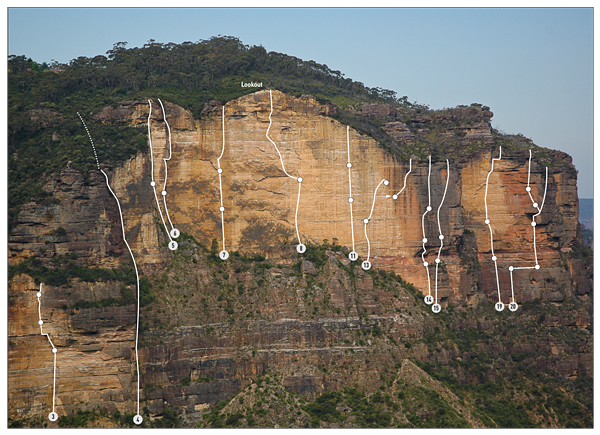 By the time his ground breaking guidebook, Rock Climbs in the Blue Mountains, was published in 1967 John Ewbank had established numerous routes, with many in the 17-21 grade range, levels unthinkable only a few years earlier. His hardest route in the Blue Mountains, The Janicepts, a formidable crack at Mt Piddington, was graded 21 with rests in 1966. So far ahead of the game was Ewbank, that the rests weren’t eliminated for another eight years! It remains a solid 21 test piece crack today. 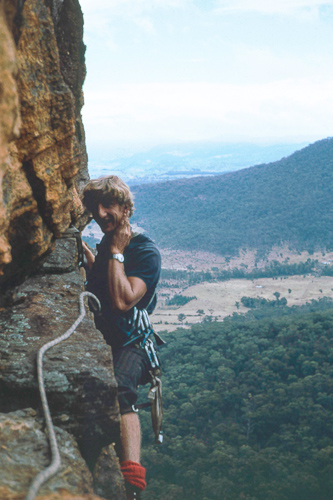 Many of Ewbank’s easier climbs remain far more intimidating and some rarely see repeats. Many of his routes were monumental efforts, especially given the equipment of the day. One fine example of this was Ewbank’s lead of the mighty line of Solomon (20), which he bolted standing on wooden wedges driven into the crack.

Still, bolting sat uneasily with Ewbank but gear was primitive and almost impossible to get in Australia. Ewbank saw the benefits of clean climbing and developed a type of early chock, known as “Crackers”, which he manufactured and sold to other climbers throughout the country. He soon became obsessed with eliminating pins and bolts on routes where he could.

Outside of the Blue Mountains, Ewbank also pioneered classic long, hard routes in the Warrumbungles in Western NSW, on the iconic Totem Pole in Tasmania and even managed a quick trip to Mt. Arapiles, along with numerous other areas throughout Australia. 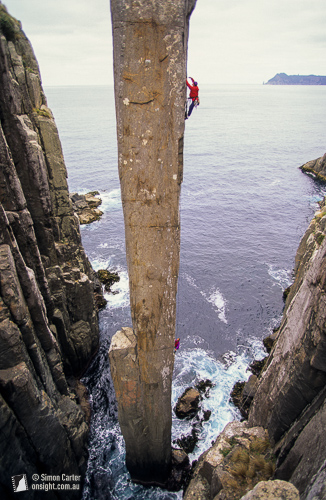 Steve Monks leading pitch 2 of The Ewbank Route, aid route, on  The Totem Pole in 1995. The route was established by John Ewbank and John Keller in 1968.

His short but illustrious career changed rock climbing in Australia forever. It is a sign of the respect in which Ewbank’s contributions are still held that Mt Piddington, vast sections of the Katoomba cliffs and Dogface are still considered to be his domain and, as such, have resisted the onslaught of the ringbolt.

John Ewbank gradually retired from climbing during the 1970s and moved to the United States, to pursue a career as a singer and songwriter in New York. John was such an interesting character. His personal website at johnewbankmusic.com is home to some of his music, writing and early photographs and well worth a visit. 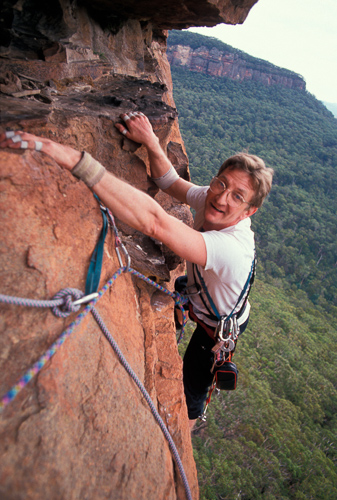 Ewbank became active again with his climbing in the 1990’s and in recent years; and he wanted to return to the Blue Mountains again soon. He was working on a book about his expansive climbing career before his untimely death and hopefully it will make it to publication, in order to give us a greater insight into this complex and incredibly eclectic personality. John Ewbank was a true giant of Australian climbing and earned his position towering over our climbing history.

His wish of being returned to the Blue Mountains for final resting will take place soon.