Is the future of hard Australian climbing set in (Elphin)stone?

It’s a rhetorical question really — but we do think it is about time to unveil Elphinstone.

Maybe you saw some “better than Taipan (Wall)” hype on Facebook but chances are you’ve probably not read too much about this place as yet. In typical Blue Mountains style, initial discovery and development was kept rather quiet, understandably. Word kind of just seeped out. But the Elephant is out of the bag now, so to speak. In fact, all of the currently available crag beta is now available on The Crag website here. The first two sentences there claim, and say, a lot:

This crag will prove to be the citadel of hard climbing in the Mountains. Pitches are generally around 30-35m, uncharacteristically sustained and pumpy, on bullet proof rock.

So let’s take a look at Elphinstone, it’s also an excuse for me to show you some new pics. Without further ado, may I present to you… (drum roll please)… ELPHINSTONE!!! 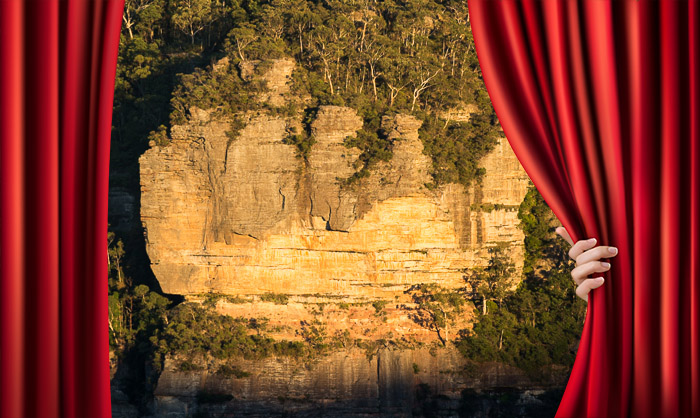 The Main Wall. Way steeper than it looks and the height is deceptive; it’s about 30-metres up to the grey rock.

Looking from Cahills Lookout in Katoomba, Elphinstone is easily visible on the Radiata Plateau (which starts near Explorer’s Tree) to the north. So it is likely that climbers had gazed at the wall and at least considered the possibilities in the past. It wasn’t until Rowan Druce came along in 2011 with a vision for the place — and the energy to nut out the difficult approach — that the ball got rolling. The only practical approach is via a 50-metre vertical and overhanging abseil. That in itself isn’t such a great problem but getting out again on a regular basis wouldn’t have been a lot of fun. That problem was solved with a whole bunch of rungs. 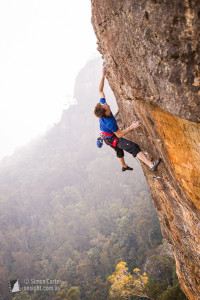 Initially, the fact that the rungs aren’t glued in can be a little disconcerting, but not too many of them seemed to have pulled out — as yet! In any case, you use your abseil rope and an auto-belay device (such as Mini-Traxion or Ropeman) to protect yourself on the climb out. It’s overhanging and can be pumpy with a pack on. But the easiest bolted route at Elphinstone is solid grade 26, so if you can climb here then the rungs shouldn’t feel too bad!

With the all-important end-of-the-day back-to-the-pub access sorted, Rowan and Lee Cossey together spent months bolting the plum lines on the spectacular and extremely steep Main Wall. Later Emil Mandyczewsky and Julian Saunders came along and snagged the plums at the Dumbo Love Sector. There is also a smaller area between the Main Wall and Dumbo Love Sector, called Gay Paris Wall, which more recently has sprouted a few lines. Scott Boladeras, Chris Coppard, Ben Cossey, Tom O’Halloran and Matt Norgrove have also contributed to the development here. 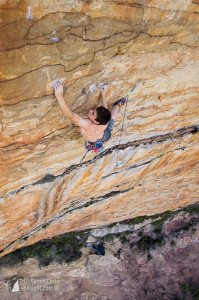 This crag is not like some others that have been developed in the Blue Mountains over the years — only to turn into white elephants. I’ve hung out there a bit this last year and — having seen the action, the rock and the many projects now on the go — I do think it’s fair to say; this time we do indeed have the real elephant deal. And that, of course, is something that a lot of Blue Mountains (hard) climbers had been hoping for.

I find it strange, and a little inspiring, to think that one of the best hard crags in the Mountains has only been discovered and developed in recent years. Will this herald a new way of looking at things? A whole lot of thrutching around in the bush and re-examining things previously under our noses perhaps? That could be interesting. In fact, I hear there’s a new crag… oh, never mind.

On paper it would seem Elphinstone has little basis for wresting the “jewel of hard sports climbing” crown away from Diamond Falls — just yet. Diamond Falls is home to one 35, two 34’s, and seven 33’s. All the Elephant can boast is two 33’s and six 32’s. Long way to go kiddo. But of course — it’s the projects. After so much time and effort has gone into bolting it’s now time to climb and inevitably there will be more big – and bigger – numbers to fall, perhaps soon. And if Elphinstone ever felt the need to pad out the numbers, it could take a leaf out of Diamonds Fall’s book, and it too could be blessed with a whole bunch of link-ups. But seriously, Elphinstone does have a lot going for it compared to Diamond Falls: afternoon shade, far friendlier (less razorbladesque) rock, and much longer routes. “Pitches are generally around 30-35m, uncharacteristically sustained and pumpy”, sums it up really. Wonderfully long, hard Euro-style resistance climbing. In a nutshell, perfect for ultra-hard climbing! 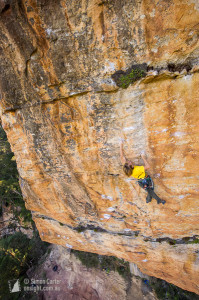 And what about that “better than Taipan” claim? Well, of course it’s a joke — and sacrilegious at that! That notion would undoubtedly have some Victorian-centric commentators squirming in their pants. Of course, nothing can dare to be compared to the beloved majestical Taipan!

Of course, Elphinstone doesn’t nearly have the good looks of Taipan. And in the same way that dating a model can, very occasionally, perhaps, possibly, on occasion, suck, in a small way, Elphinstone is perhaps very slightly more the kind of crag you’d want to have a serious relationship with. I remember chatting with Chris Sharma last year at Oliana, we were comparing Oliana and Ceuse and I mentioned that the rock at Oliana wasn’t as perfect as at Ceuse. But Chris pointed out that this was in fact a good thing for ultra-hard climbing. Compared to Ceuse’s smooth perfection which sometimes completely blanks out, Oliana is more broken and flaky but those little edges always seem to show up and give climbers something, however small, to work with. The result is very long sustained stretches of extremely hard climbing. And that’s a similar situation with (smooth perfect) Taipan and (edgy featured) Elphinstone. Add to that the fact that Elphinstone is somewhat steeper, and nor does it yet suffer from Taipan’s legacy of *cough* bad bolting, and it seems that in *some* ways, at least, the “better than Taipan” claim may not be quite as delusional as it first seems — though some qualification is certainly required. 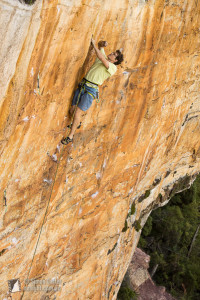 So anyway, “Is the future of hard Australian climbing set in (Elphin)stone?” Well, it was a rhetorical question because, of course, nothing is set in stone, and developments can and do occur elsewhere. But if the question was, “Will Elphinstone have much of an impact of the development of hard climbing in the Blue Mountains, or even Australia?”, then the answer to that is: yes indeed, and in time surely a fairly significant one. Of course, some of Australia’s strongest climbers don’t live, or regularly climb, in the Blue Mountains, but there are some that do. And for these locals, this crag has been a godsend. Indeed, the crag has already seen some significant ascents, in particular Andrea Hah’s send of the freshly minted Tiger Cat last year, which was only the second grade 33 route to be climbed by an Australian woman. Also, because of the hard resistance style of climbing, the fitness that climbers develop here will transfer nicely to other places as well. So Elphinstone is already having an impact on the development of hard climbing around here — and it is really just getting started.

But in a nutshell, the routes at Elphinstone are long gob-smacking lines with great climbing. They have got some of the best climbers around here inspired and excited. Frothing. And in terms of hard climbing — or just climbing in general — that, surely, is the most important thing of all.

So welcome to Elphinstone!

Just click on an image to browse the gallery.

Thanks for reading my blog. I hope you enjoyed the article and photos. If so, please share it with your friends.

And please take a moment to subscribe to our newsletter that will be starting soon.
More info and subscribe –> here.