The same day that we were at Gorges du Loup catching up with Muriel Sarkany, I had the pleasure to meet the very talented French climber Guillaume Lebret. He was trying to do Trip Tik Tonic without the two sika (glue) holds — and I snapped this shot of him on it. I didn’t even know what route he was on, just though that it looked really hard; only later did I discover it was the famous TTT. There was no joy for Guillaume that day but he sent it a few weeks later. Damn good job! Without the sika holds the route is French grade 9a which would be Australian grade 35 (except that we don’t have any routes that hard, apparently). If you can read French then you can get the full story on his website here.

I think Guillaume might be following us around Europe… We are now in Spain climbing mostly at the super-crag Oliana and Guillaume turned up a few days ago. We quickly went to work on the ultra-classic Mind Control (8c+) which he smoothly send on his third day on. We were then back at the crag yesterday (after a rest day) and watched him do another test-piece: Fisheye (8c) in the blazing sun — obviously not being the least bit precious about conditions. I think he might have got the send out-of-the-way so that his mates could enjoy the shady conditions later in the day. I’ve climbed for 26 odd years now and it was only when watching Guillaume climb that the penny dropped and I finally learnt the solution to climbing in crap conditions. Yep, darn it, the answer is: “get better”! 😛 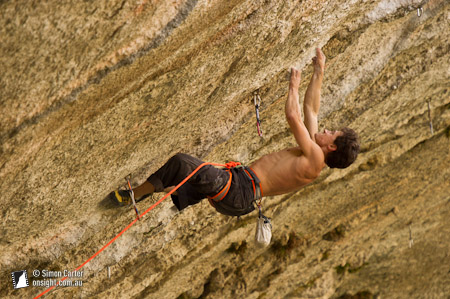