At last I’m really stoked to announce some good news of our own from Oliana, Spain. On Monday Monique sent Chris Sharma’s uber-classic Fish Eye. It’s her first 8c, or Australian 33, graded route. It proved to be a hard and frustrating process, but I think that just has made it all the more satisfying in the end. Yep – we’re celebrating! 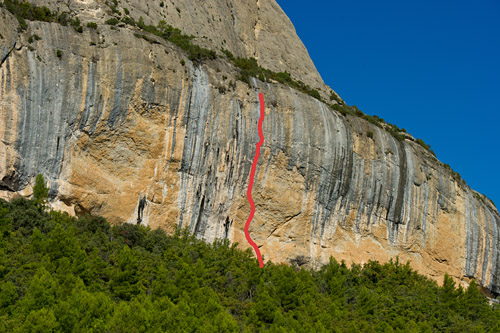 Fish Eye is a very cool looking route blasting straight up the guts of Oliana. It has hard resistance climbing between crux’s and a red-point crux 45-metre’s up the 50-metre route. Monique first tried it on our trip out here last year. She spent enough time on it then to work out the moves start linking long sections. On the second last day of that trip she got really high on the route (on redpoint); it was enough for her to get super-psyched and confident that she could do it.

When we returned this year Monique was fitter than ever but the route did not submit as easily as we had both expected. After two weeks she was getting good linkage. Monique started getting through the main crux about, 28-metres up, and a tricky section above that, more often, and started making it through to the top redpoint crux. It was looking good. I bought some champagne and it waited, chilled, in the fridge. The first few times she fell from the top crux we thought, fine, maybe she doesn’t have the route fitness yet, or maybe she needs to refine the moves there a bit more, but after she came screaming off from there a few more times we really started to wonder “would she ever do it”? Oh no. It was frustrating. Maybe I jinxed it – buying the champas too soon? Getting that high on the route would mean she’d be too gassed for a second shot the same day.

Then the weather intervened, it rained, well flooded, and she had three days enforced rest. It was probably what was needed though — at least for the splits in her fingers to heal. So this time, eh? Errr, no, not to be again. So she took a break for a day and tried Mon Dieu (8a+), which she’d dogged earlier, and ended up sending that. So this time she came back to Fish Eye refreshed. She was looking stronger than ever and made it up to the final rest – below the top crux – again. It was her eighth time up there… but this time she darn well nailed it to perfection. Such a sweet send!

Monique has written about it all too, on her blog here — check it out!

So I lowered Monique off the climb, she got down to the ground and after a few minutes celebrating says “right, what next?”. She was chomping to get on some of the other routes she’d been putting off. “Um, not so fast babe” I say, and sent her back up there for some photos… here’s a few of those – taken right after the send! 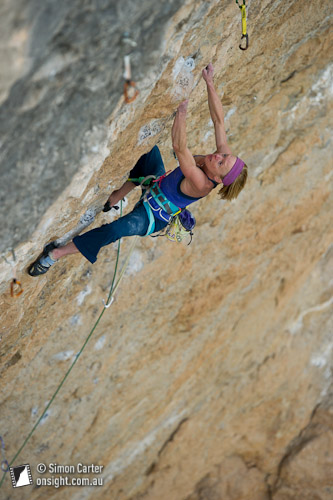 It’s awesome watching — and being able to help — someone’s dreams come true. I know that beyond anything else, Monique was really inspired by this route and she wanted to push her climbing to a new level. Personally, I think it’s also great to see the standards of Australian climbing being raised too. I don’t doubt that Monique has the potential to climb harder too. Will she? Who knows. She’s 39, a mother, does not have any financial sponsors. We are both really grateful that she has at least had this opportunity. Many thanks indeed to everyone who has supported Monique and her climbing! The support she’s received from family, friends, and some gear companies, has really made a huge difference. 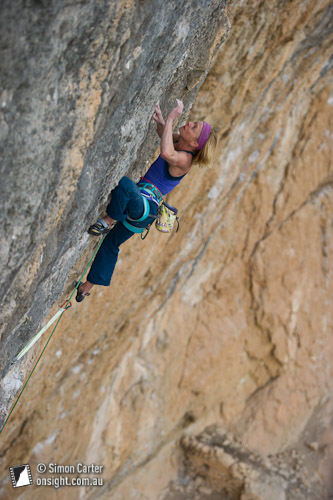