I had the “pleasure” of being interviewed on ABC radio with James Valentine this afternoon about the Nowra route name issue. Listen here. Tune in right near the end at the 2:48:10 mark, for the start of the segment.

If you don’t know what this is about, it all follows an ABC report this morning, which follows a massive debate on the Melbourne Climbing Facebook group page about six weeks ago.

As publisher of the Nowra guidebook I have of course followed this issue since it flared up overseas. I’ve discussed it with the main contributing authors of the Nowra guidebook. We’re aware of the issues and have contacted some first ascentionists (thanks Rob) and have about 50 route names which will be changed in the next edition at the approval of — or at the suggestion of — the first ascentionists themselves. But there is no rush because we won’t be producing a new edition of the guidebook for about two years. When it’s time to be working on the update, we will sit down and look at it all, work through the changes and do anything else we need to do. Of course we want climbing to be an inclusive “sport”.

However it is an issue of balance. Documenting history vs sanitisation and censorship. Respecting the wishes of first ascentionists vs running the risk of alienating or offending someone. Etc. Where do you draw the line? As the first ascentionists of many potentially problematic routes names are offering changes themselves, it a problem largely solved just by that. My opinion is that the problem with some route names would actually be easily solved by providing more context, more history and background, about those names in their route descriptions. It’s not possible or desirable to cater for every possibility that something might be taken out of context.

I am immensely proud of the work the team and I put into the Nowra guidebook in 2016. Climbers now have an excellent, accurate, easy to use book to help them maximise their time at the crag. NSW police rescue now have a resource which they may well rely on if they need to quickly locate a climber who has had an accident. But it was a first edition. It was an incredible amount of work for all involved just to get it finished. A bit more context and history is something I’m very keen to work on for the next edition. Please, buy a guidebook, support what we’re doing and help make our work easier. Thank you to everyone who already does. 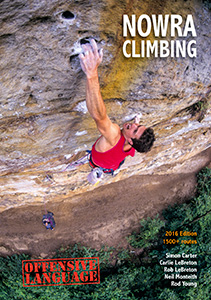 I’m just disappointed this issue became public like this. I’ve spoken with the guidebook’s authors — but not one other person has bothered to reach out and contact me about the issue, raise their concerns privately, ask what I as publisher planned to do about it, what the best way to go about it might be. So I feel this public debate has all been rather unnecessary, divisive and damaging. Sign of the times. It is what it is, I guess.